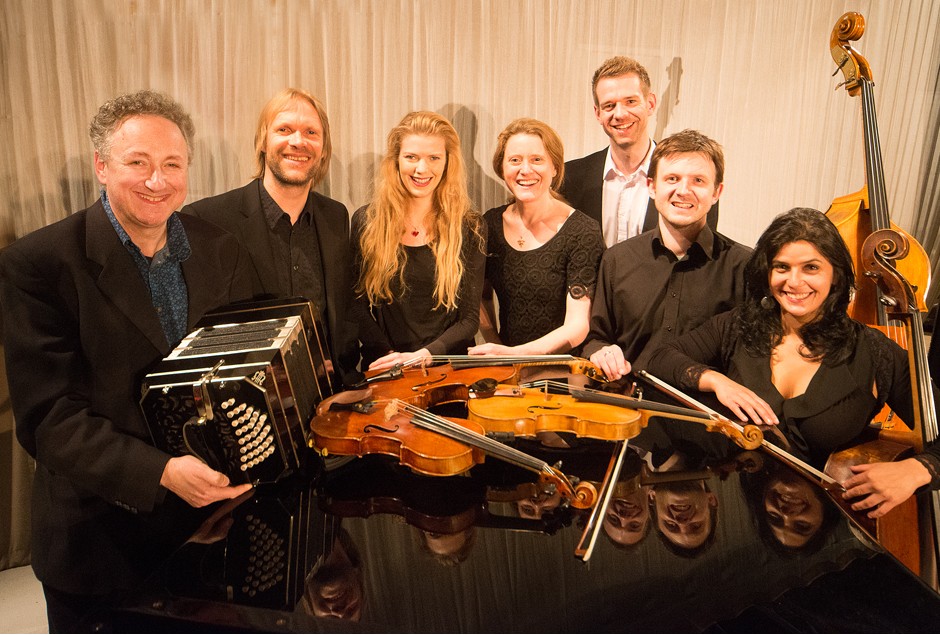 London based tango orchestra “Orquesta Tangazo” is Tango Siempre’s latest musical project, a septet featuring the musicians of Tango Siempre and the Sigamos String Quartet. The London, UK based Tango Orquesta Tìpica recreates the lush, romantic sound of the great Argentinian orchestras of tango’s golden age in the 1930s, 40s and 50s, bringing together some of the UK’s leading exponents of tango, contemporary and world music to perform traditional, nuevo and contemporary tango music with energy and passion.

The septet has performed on Radio 3 “In Tune” and appeared at UK venues including the Purcell Room. Snape Maltings Concert Hall, Bridgewater Hall Manchester, York Early Music Centre, Oxford Playhouse and the St James Theatre, and has appeared at the Tango Movement Winter Ball for a number of years.

The Sigamos String Quartet, led by Ros Stephen of Tango Siempre, specializes in collaborations with jazz and world music artists. The quartet has recorded three critically acclaimed albums (including “For The Ghosts Within” with Robert Wyatt) and has toured throughout the UK and Europe. Their recordings have been broadcast on BBC Radio 3 and 4 including Late Junction, Front Row and Jazz on 3.

Please see below for audio and video clips of the ensemble, and biogs of the musicians.

“Their playing has the verve and gut-wrenching rhythmic drive associated with the greatest Argentinian bands… here is the tango, raw, intoxicating, speaking with its true voice.” – Financial Times on Tango Siempre.

“…the well-tempered, note-perfect string quartet shifted through romance, irony and despair on the point of a pin… they impressively integrated classical textures with jazz delivery.” (*****) Mike Hobart, Financial Times on the Sigamos String Quartet.

“This is the most exquisite album I have heard this year.” – Keith Bruce, Scotland Herald, on the Sigamos String Quartet’s 2010 album with Robert Wyatt.

The core of the septet is made up of the members of Tango Siempre’s quartet :

Additional players in the septet are:

Marianne Haynes (violin) studied at Chethams School of Music before gaining a full scholarship to study at the Royal Academy of Music. She studied with Lydia Mordkovitch, Mateja Marinkovich and Howard Davis.

Marianne has led/co-led the Heritage Orchestra for 7 years. This has led to working with artists as varied as Massive Attack, Beardyman, Stan Sulzman, Django Bates, Jamie Cullum, Dizzee Rascal and Goldie amongst others. Marianne also enjoys freelancing with the London Concert Orchestra, RPCO, Glenn Miller Orchestra and London Contemporary Orchestra amongst others.

Felix Tanner (viola) studied at the Royal Academy of Music where he was awarded the Sir Arthur Bliss Prize, the Marjorie Bunty Lempfert Award, the Sir John Barbirolli Award, the John Ireland Chamber Music Award and the Theodore Holland Viola Prize. He is a member of the prize-winning Brodowsky String Quartet, with whom he has performed at leading concert venues including the Wigmore Hall, Queen Elizabeth Hall, Barbican Hall, Purcell Room, the Edinburgh Festival and the Brighton Festival.

Laura Anstee (cello) studied at the Royal Academy of Music where she was awarded a Dip.RAM for one of the highest performance achievements in 2002, the Herbert Walenn prize for cello, the Douglas Cameron prize for cello and piano, the McEwen quartet prize and the Gwyneth George prize from the Beethoven piano society of Europe. She has performed as a soloist on BBC Radio 3, has collaborated with contemporary composers including György Kurtág, Arvo Pärt and Judith Weir and has performed with the Goldberg Ensemble, the Bournemouth Symphony’s Kokoro ensemble and with the English National Opera’s choral group Knack.

Midnight Tango featuring Tango Siempre will be screened as part of "The Show Must Go On" this Friday on YouTube (7pm and available for 48 hours).

Midnight Tango to be streamed on YouTube as part of The Shows Must Go On! series | WhatsOnStage

The show will be available online

One of our last gigs before lockdown - the Tango Movement ball, with the septet ... See MoreSee Less

This Friday, Tango Siempre are giving a lunchtime concert of golden age, nuevo and contemporary tangos at Bishopsgate Institute near Liverpool St, London.

This week we open up our dancefloor as we welcome Tango Siempre to take us into the world of Argentinian tango. World-famous for our Library, every concert

When this happens, it's usually because the owner only shared it with a small group of people, changed who can see it or it's been deleted.

Tango Siempre are delighted to announce that we will be joining Vincent Simone for his Tango Passions tour this October.

King of the Argentine Tango, and Strictly Come Dancing legend, Vincent Simone, returns to the stage in Autumn 2020 with his brand new tour 'Tango Passions'.

Accompanied by Argentine Tango specialist dancers, plus Tango band 'Tango Siempre', come on a journey to Buenos Aires for a passionate night of dancing that is not to be missed 🔥💋